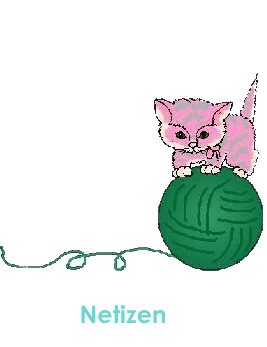 Yes, I believe myself to be a "netizen." I began my journey into the Internet in January of 1992 at Purdue University, through this *thing* called a haven , where I established myself as Skeeter (after the Muppet Babies' character). I met some people from the Colorado School of Mines back then, and a bunch of us used to roadtrip there seasonally. Soon after the roadtrips, when Skeeter's reputation became "less than respectable," I slipped into the persona of Pink Kitten, and hid in a channel from most everyone. The havens went through a phase of being on worldwide chat room lists, and I frequented them less and less. My roommate at the time, Mystikite, lured me to Delusions MUCK, where he created a room and home for me in his castle. Although I still go there once in a while, I have returned to my original haunts, now that the membership of anonymous users has declined. I went back to being called Skeeter, and nowadays I can be found on the Anti-Haven (very oldbie-elitist), Tsunami's Hotel California (with my very close friends), and Kazi's Illusions (which still acts as a big chat room meeting point for some reason). I use GAIM to talk with old friends and co-workers when I get the chance, but find it less personal than the havens ever were.

This page authored by Jennifer Bolton, and maintained by Brandy Long.

The creative content of these pages are copyright 1996 by Jennifer Kelbaugh (Bolton). Said contents may not be published for profit or restricted without the express written permission of the author.